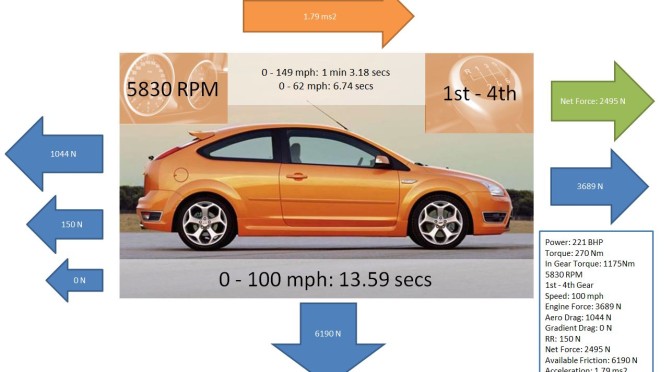 A second year University Project was to produce a spreadsheet that could be used to aid gearbox setup.

The spreadsheet I created can be downloaded using the link provided below. The spreadsheet visually demonstrates how gear ratios are spaced out and further provides more in depth information.

Providing engine specifications, along with other information such as drag co-efficient and cross section information enables the spreadsheet to calculate acceleration times and provide detailed information at a glance such as:

Furthermore, the spreadsheet can be adjusted for windspeeds (both tailwind and headwind) and gradients (both positive and negative).

There are limitations to the spread sheet design and in terms of its simulation of acceleration times. There is wide scope for improvement with regard to gradient and wind speed modelling, however these are to be considered additional to the requirements and are still relatively stable.

The overall accuracy of results is impressive; during several tests of production cars with manufacture stated figures the results have been more than acceptable. The spread sheet is saved with the details for a Focus ST as the base settings, which very closely matches the manufacturer claimed specifications.